The four-way shuttle rack is a high-density storage system composed of racks, remote-controlled shuttles and forklifts. It can be divided into two-way and four-way shuttle racks; take the advantage of the shuttle panel, combined with the shuttle carrier, stacker, warehouse management software (WMS), etc., the system can become a small and medium-sized shuttle warehouse system.

1.The four-way shuttle rack system is very flexible. It can change the aisle at will, and can stay in any position for operation. The system capacity can be easily adjusted by increasing or decreasing the number of shuttles runner.

2.The four-way shuttle system flexibly adjusts the operating aisle of the shuttle to "untie" the aisle and the hoist, so that the bottleneck problem of the multi-layer shuttle on the hoist is solved, and the equipment can be configured according to the operating flow to reduce equipment capacity. Waste, the cooperation between the pallet shuttle runner and the hoist is more flexible and flexible.

4.In terms of the overall cost of the system, since the cost of ordinary multi-layer shuttles is closely related to the number of aisle, under the condition of increasing orders and not increasing inventory, each additional aisle of these systems will increase the corresponding cost, while the four-way shuttle system only requires Just increase the number of shuttles, and the overall cost is lower. 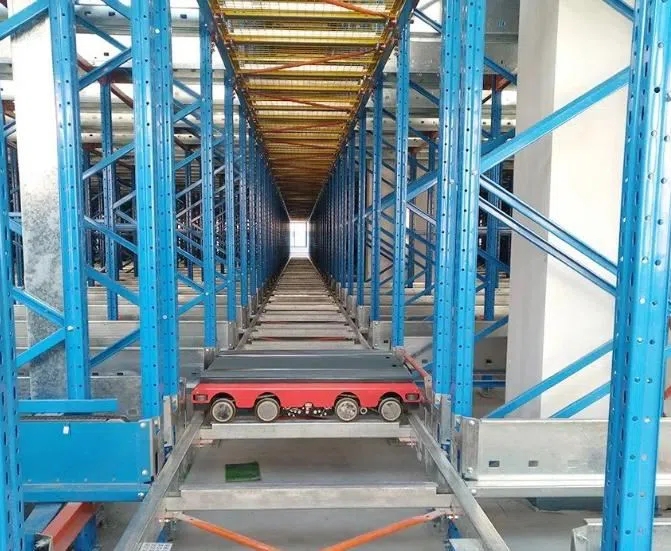 5.Compared with the traditional multi-layer shuttle racking system, the four-way shuttle racking system has more advantages in terms of safety and stability. It is not only suitable for low flow and high density storage, but also suitable for high flow and high density storage and picking, which can be better To meet customer needs.

Previous: The Truth of Building an ASRS for Pharmaceutical Industry
Next: Why Old Warehouse Cannot Modify to ASRS Warehouse